Just Voices is the name we voted for when our new Musical Director, Sharon Ashton, joined us in 2013.  Prior to that we were known as “Lord Street Parade”, after the famous Victorian main street of Southport on the North West coast of England. 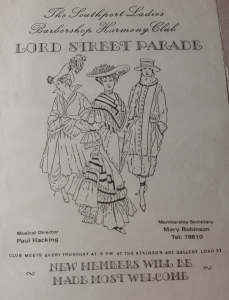 The original barbershop ensemble was established in 1990 when Paul Hacking was the Musical Director.  During this time the chorus was a member of LLABS and entered many competitions all over the country.  As the chorus developed there was a change of Musical Directors, Sally Hiscock for a short period and then more recently Margaret Hughes, who retired in 2013.  Amazingly we are now in our 25th year!   This milestone was celebrated in style with a party – where other local barbershop choruses joined us – Mersey Harmony Ladies, The Wayfarers from Southport and Grand National Men’s Barbershop from Liverpool.  It was a glorious evening of fun and singing and the usual delicious buffet provided by our very capable chorus members!

The members have always been extremely supportive and in the early days they could be found hosting many a fundraiser and performing at many charity singouts, as well as attending Barbershop Conventions.  There is many a ‘fun’ tale to be told when looking through the photographs in our ‘History Albums’ with some of the original crew!

And so to more recent events.  In this our 25th Year we are proud to say that under Sharon’s direction we have once again won first prize in the Barbershop section of Southport Music Festival:-

“This was an amazing win for us.  The audience and our fellow competitors were so appreciative and complimentary of our performance – we felt it was a double win with our peers praising us too.” – a quote from Sharon, which appeared in the local paper.

Despite the change of name and musical directors over the years there has always been two constants with this choir of ladies – their sense of fun and the warmth of their welcome!  Here are just a couple of quotes from both a founder and a more recent member:-

“I was a little apprehensive turning up on my own but I needn’t have worried – the ladies were wonderful, so kind and thrilled to have me!” – Angela (joined in 2006)

“Seeing the advert for the chorus was a godsend for me, it helped me start to enjoy life again.  It was so enjoyable meeting people from all walks of life with one thing in common, the love of Barbershop singing.” – Doreen (founder member)